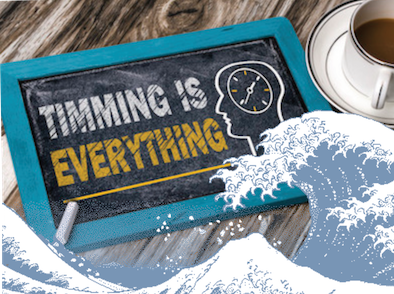 “Silver Tsunami” Heading Our Way - Business Timing is Everything

Everywhere you turn – in print and online - in the finance, retirement, investment, healthcare and entrepreneurial communities, you can find information about the “Silver Tsunami” – or wave of baby boomers that will be retiring over the next 10-15 years. For example:

• 12,000,000 business are privately owned
• 66% of small businesses are owned by baby boomers
• Boomers generally had fewer children creating a generational void in some cases

While you can find similar statistics in a multitude of places, the bottom line is individuals born between 1946 – 1962 are ready to transition into the next chapter of their lives. Additionally, there was a segment of the population whose retirement was deferred during the Great Recession of 2008-2009. In the years since, their businesses and portfolios have recovered and they are ready to move on.

So, there will be plenty of assets transferred over the next several years, but in today’s world, the next chapter doesn’t necessarily mean retirement. Some Boomers, since we are living longer, may want to semi-retire, take on an investment partner and continue to build wealth. Others may want to sell and then explore other opportunities.

Now, consider this….in addition to our retirees, there is currently a large pool of individuals (buyers) between the ages of 40-55 – who worked hard, were well compensated, have invested wisely and are tired of working for someone else. They are ready to control their own destiny. What this means is that we have a confluence of potential buyers emerging that won’t be around forever.

And, there is one other economic factor that is contributing to this “sellers market” - available money, a.k.a, investment dollars.

According to Ami Kasser, founder and CEO of MultiFunding, “Before the Brexit vote, Janet Yellen, our Federal Reserve Chairwoman, told Congress, “…the possibility of Great Britain departing from the European Union, and other global risks may force the Fed to forgo interest rate hikes…”, which means interest rates will stay low, spurring investment.

We’re looking at potentially twice the number of buyers as sellers – for the next few years AND money is cheap. Business Timing is everything… if you’re considering a change, now may be the time.