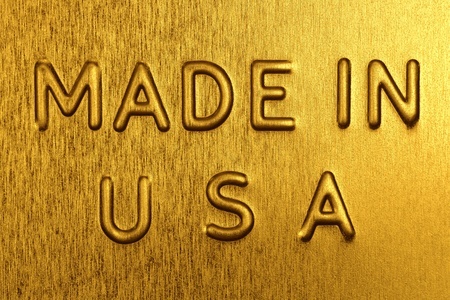 Reckon with it before you reject it. We’re not saying it’s easy to do and we know it could mean putting forth great efforts. There are problems, issues and snafus to say the least, that make it considerably difficult to manufacture domestically. However there are manufacturers that are doing their darndest to work it out, finding their way around these walls with some recalculating and reevaluating. These manufacturers are serious about their stitch in the social fabric of this country. Can you be one of them?

There’s a shortlist of some manufacturers that have taken production to the U.S. These companies experienced obstacles and headaches that instigated the move back. Poor quality and difficulty of traveling overseas or waiting for production is on the menu.

Lonnie Kane, president of Karen Kane points out that they used to check only 10% of the goods that came from China. “Now prices are escalating, quality is dropping and deliveries are being delayed,” he says. In the last three years, Kane has shifted 80% of his production from China back home.

Large-scale domestic expansion is happening more in other industries. A growing number of domestic and foreign companies like General Electric, Caterpillar, Toyota and Siemens are either building or expanding facilities in the U.S., particularly in the Southeast, where labor costs are relatively low.

Harry Moser, founder of the Reshoring Initiative to help companies recognize that U.S. manufacturing is often the most profitable choice. Moser maintains that the costs of going overseas have been profoundly miscalculated and wildly underestimated, and American firms are beginning to realize that the total cost of going abroad doesn’t justify offshoring in the first place.

“What used to be done in 50 parts is done with one part,” explains Matt Turpin, the president of Zentech. “And the automation within the assembly area has grown by leaps and bounds. It’s light years ahead. So now, when you compare the U.S. to Asia, if your raw materials cost the same, if your cost to buy the automation equipment is the same, if your cost to finance the capital is the same, and your labor is down to 5 minutes or 10 minutes,” well, then, you may as well manufacture here.

There are very valid matters that manufacturers run into that don’t have to do with cost. A lot of times there’s difficulty finding domestic component suppliers, rendering them assembling domestically rather than actually manufacturing. One company admitted they knew practically nothing about manufacturing and had to reverse engineer products that were made in Chinese plants.

So often in business, though, it does come down to COST. Supply chain managers are the guys that do all the number-crunching to see where to take production that’s the most cost-effective for the company. Generally they use what’s called price variance. Its not the best or most accurate method for calculating Total cost. It does not factor in ancillary costs; overhead or corporate strategy development. Not factoring in all the costs seems like a defective method. Using this method omits things that cause cost fluctuations like new or altering trends.

A company should analyze all the variances, since not only price variance exists, looking at them all together at once instead of evaluating them individually. The most sophisticated systems separate unit and price factors on materials, hours worked, cost-per-hour on direct labor, and fixed and variable overhead variances. Though difficult, this kind of analysis can be invaluable in a complex business. Prop them up against each other. Yeah, you may have fallen into a positive variance in say, Advertising and have not spent what you had planned but System sales fell way below expectations. Could advertising (or lack) have been the cause?

Moser believes that there’s an advantage for some corporate biggies to use the price variance. If they use it and say, cut 50 million for offshoring it’s easy to justify a huge bonus for that big-time guy. But if you keep it here and work hard on keeping it lean or paring down costs in other areas and saved 5 million it’s a lot tougher to give yourself a bonus and it’s more difficult to do. He thinks, “There’s a … personal incentive bias to take advantage of that price variance mechanism instead of looking at the total cost.”

Then there’s the whole issue of currency manipulation. Artificially reducing the conversion rates from Yuan to American dollars makes it cheaper for American companies to manufacture overseas. Though there have been bills proposed to combat currency manipulation, they’ve been largely stalled in Congress. Why? The BIG publically traded manufacturers who do a s&#t load of outsourcing to China oppose those bills furiously – of course!

These manufacturers, without a reshoring-for-dummies-instruction manual, flexed their very entrepreneurial muscle and figured it out. SO……figure it out my winning manufacturers! How? Well, for starters – Harry Moser and colleagues put together a Total Cost of Ownership System. This is NOT the price variance method of calculation! Moser and teams is a matrix of 36 cost factors (as opposed to 3). The tool is FREE !!!!!!!

Among the 36 factors that create the “total cost of ownership,” the algorithm calculates non-traditional ancillary costs, like overhead, corporate strategy and other internal and external business costs. It gets granular, too, trying to quantify what previously had been considered unquantifiable, including items like “the expected percentage price of IP risk” or the “Opportunity cost due to delivery and quality: lost orders, slow response, lost customers, [as a percentage] of price.” In total, there are 36 elements that make up the total cost algorithm.

These are factors that haven’t been brought into analysis in the past but should be!

Can we somehow make offshore manufacturing a losing proposition? Let’s shore up Reshoring! How many of you are just assuming that taking your manufacturing overseas is the better bet? At the very least, try the free cost calculator!

This is the time for manufacturers to start behaving like the entrepreneurs that they are, brimming with the qualities of leadership, initiative and innovation – the very entrepreneurial spirit that has always belonged to the soul of this nation.